The donation of a lifetime

Jacqueline (Jacqui) Shumiatcher, a dedicated supporter of the Western College of Veterinary Medicine’s (WCVM) Companion Animal Health Fund (CAHF) and long-time member of its advisory board, passed away on February 1, 2021, at the age of 97.

Jacqui and her husband, Dr. Morris Shumiatcher, were well known throughout Saskatchewan for their generous philanthropy initiatives.

“Jacqui and her husband Morris had several dogs that brought them so much joy,” said Jennifer Molloy, WCVM director of development. “Like so many of our supporters, they just had a very deep, genuine love for animals.”

Over the past seven decades, the Shumiatchers supported a wide variety of organizations in both Regina and Saskatoon, including the University of Regina, the Conexus Arts Centre, the University of Saskatchewan (USask) College of Law and the WCVM.

After her husband’s death in 2004, Jacqui continued to uphold her family’s community work in supporting organizations representing the arts, education and health care research. Her efforts earned her the Saskatchewan Order of Merit in 2001 and an honorary doctorate degree from the University of Regina in 2002. In 2017, Jacqui was inducted into the Order of Canada — an honour that her husband received in 1981.

Jacqui’s relationship with the WCVM began in the 1970s after one of her family’s beloved dogs, Mr. Pickwick, was hit by a vehicle and required specialized treatment at the WCVM’s veterinary teaching hospital. The experience prompted the Shumiatchers to make an annual gift to the CAHF.

“I suppose you can call our annual donation a memorial for all of our little animals that have come and gone,” said Jacqui in a 2000 interview for Vet Topics.

Her genuine interest in the college’s research program also led to an invitation to join the advisory board of the college’s pet health research fund. In this role, Jacqui helped to review and advise on the annual research projects that should receive funding support from the CAHF.

The CAHF advisory board is comprised of animal owners, veterinarians and industry representatives who all come together “with the one goal of improving companion animal health,” added Molloy.

“I think they’re such a dedicated lot at the college, and they do excellent work,” described Jacqui in an earlier Vet Topics interview. “When they give as much as they do to improving the health of companion animals, we should do our part as well.”

After Jacqui’s passing, a gift of over $100,000 to the CAHF was realized through her estate.

“This very generous gift will advance the research priorities of the fund. Jacqui loved animals so much that she prioritized helping them, even after her passing, to live longer, healtheir lives,” said Molloy.

“If anything, we wish that we could thank people more before these gifts are realized. But we’re just extremely grateful for the commitment and generosity of our donors — those like Jacqui.”

If others wish to donate to the pet health fund and to the WCVM, Molloy suggests that potential donors visit the CAHF website (cahfpets.ca) to view the latest research projects and to learn more about donating. They’re also welcome to contact her or her colleague, Lindsay Royale, in the WCVM’s Development Office (wcvm.supportus@usask.ca.

Jessica Colby of Montmartre, Sask., is a University of Regina journalism student. She worked at the WCVM as a summer research communications intern in 2021.

This site uses Akismet to reduce spam. Learn how your comment data is processed. 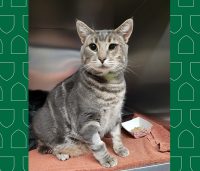