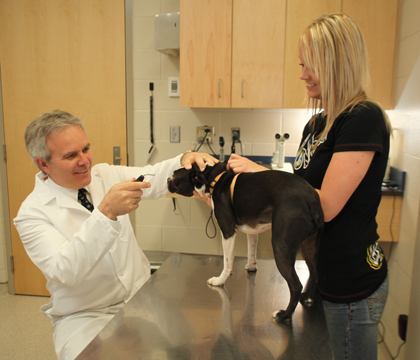 In 2010-2011, 11 research teams at the Western College of Veterinary Medicine received nearly $110,000 in funding from the Companion Animal Health Fund to investigate important health issues that affect pets across Western Canada and beyond.

Laryngeal paralysis is a common respiratory disorder that affects older medium to large breed dogs. Symptoms include voice change and mild coughing but can elevate to respiratory distress in more advanced stages.

Clinicians need to lightly anesthetize a dog and visually examine its larynx to confirm diagnosis. While thiopental is often used as an anesthetic drug for this procedure, the research team will evaluate the use of two other options: alfaxalone and a combination of propofol and diazepam.

Researchers will anesthetize eight healthy dogs on three occasions to test each agent. Once each dog has reached a light plane of anesthesia, a clinician will insert a videoendoscope for the laryngoscopic examination. Researchers will use video and still images to determine which protocol has minimal effect on laryngeal motion and provides a fast, smooth recovery for patients.

When veterinarians need emergency access to a patient’s blood vessels, an intraosseous (IO) catheter — a catheter placed into the bone marrow cavity — is recommended. But since manual IO catheter placement can be time consuming and requires experience, clinicians rarely use the procedure in small animal patients.

Physicians in human medicine use a small, needle driver device to successfully place IO catheters in their patients. Since this option hasn’t yet been tested for veterinary use, this study will evaluate the use of the semi-automated device for IO catheter placement in a feline cadaver model.

As a first step, the team members will time and video record a student with no prior experience as he performs both techniques 10 times and rates the ease of each procedure. Next, 20 students and clinicians will have three tries to place IO catheters with the needle driver while researchers record the ease and success of the procedure. Altogether, these findings will determine if the automated procedure can be done quickly with minimal patient trauma.

Partial or complete rupture of the cranial cruciate ligament is a common cause of hind limb lameness in dogs. Surgery is frequently recommended to re-establish joint stability and slow the progression of osteoarthritis in the stifle (knee joint) that becomes loose and unstable after a CrCL rupture.

A knee brace could be useful for short-term stabilization during and after surgery and for protection of repairs in active dogs after surgery. It may also be helpful in medically managing dogs with partial CrCL ruptures.

In this study, researchers will measure the effectiveness of one product — the A-Trac Dynamic Brace — for stabilizing tibial thrust (forward movement of the tibia relative to the femur) in at least 20 client-owned dogs. First, team members will take X-rays as each dog stands with and without weight on the affected limb. The process will then be repeated with the brace in place.

Afterward, the dogs will be sedated, and radiographs will record joint stability as a test device induces tibial thrust with and without the brace. Results will enable veterinarians to determine whether to use or to recommend this particular brace.

Feline pancreatic cancer (FePAC) is an aggressive and life-threatening disease that’s difficult to diagnose because its symptoms are often non-specific and resemble those for pancreatitis — a more common and benign disease. Since there’s no reliable diagnostic test for FePAC at its early stages, patients are often treated for pancreatitis, resulting in late detection and widespread systemic metastases.

Researchers have recently linked three proteins to pancreatic malignancy in humans, and these proteins may potentially serve as biomarkers that would diagnose pancreatic cancer at its early stages. Similarly, this project will seek plasma proteins which have the potential to act as biomarkers for FePAC and facilitate an early diagnosis in cats. Early treatment could increase their survival time and improve their quality of life.

Researchers will acquire plasma samples from 45 cats diagnosed as healthy, having pancreatitis or having FePAC. Comparative proteomic investigation will be used to analyze and compare the samples for differences in plasma protein profiles. Proteins detected only in cats with FePAC will be identified by liquid chromatography mass spectrometry. Future studies will examine these proteins that may be potential biomarkers for FePAC.

BMA (bone marrow aspirate) and BMB (bone marrow biopsy) are two complementary manual procedures that are routinely performed to obtain bone marrow samples. These samples are valuable for making diagnoses and for monitoring malignancies and therapies.

An automated driver that has been approved for humans allows samples to be taken faster and less painfully. This study will evaluate a similar device for cats.  Researchers will also compare the quality of BMA samples taken at two different sites (the iliac crest and proximal humerus) and will assess standardized sedation protocol.

After preliminary testing and evaluation of the automated driver, researchers will take blood samples from 12 cats before and after sedation. These samples will be used to assess the effects of a standardized sedation protocol. Clinicians will then perform the BMAs at the two different sites in each cat using both techniques. Next, they will conduct BMBs at the iliac crest using each technique. Using subjective and objective criteria, researchers will compare the two methods for speed, ease of use, quality of samples and post-procedure pain levels.

Establishing the effects of exercise on normal dogs has facilitated the study of collapsing syndromes in racing greyhounds and Labrador retrievers. But normal post-exercise parameters haven’t been established for border collies nor has BBC been fully described or evaluated.

Fourteen adult border collies with no known history of collapse will undergo a complete physical, orthopedic and neurologic examination. For 10 minutes, each dog will be strenuously exercised as a video recorder documents its gait, respiratory character and pace. Researchers will measure each dog’s rectal temperature, heart rate, respiratory rate and urinalysis before and after exercising. Dogs will also undergo DNA testing. This study aims to establish baseline parameters for healthy border collies undergoing standardized strenuous exercise protocol and will be a starting point for future research on the syndrome.

When a dog ruptures a cranial cruciate ligament in one of its hind limbs, veterinary surgeons can stabilize the CrCL-deficient stifle by eliminating tibial thrust during weight bearing. Tibial plateau levelling osteotomy (TPLO), tibial tuberosity advancement (TTA) and triple tibial osteotomy (TTO) are all effective surgical treatments for CCL ruptures, but the biomechanical principles behind each procedure differ.

A WCVM research team wants to define the mechanism of action for the TPLO and to demonstrate that it works similarly to the TTA and TTO by creating a patellar tendon angle (PTA) of 90 degrees. They will also test the argument that the results of all three procedures are similar and equally effective.

Using radiographs, researchers will evaluate the patellar tendon angle of 40 patients prior to surgery. Following a TPLO procedure, they will repeat the radiographic evaluation. Defining the TPLO’s mechanism of action will allow for further refinement of the technique, and researchers will confirm whether or not the best procedure is the one most familiar and successful for the surgeon.

Glaucoma, an elevation in intraocular pressure (IOP), is the most common blinding condition of dogs and is diagnosed as primary, secondary or congenital. Pectinate ligament dysplasia (goniodysgenesis) refers to a range of congenital abnormalities that predispose dogs to developing glaucoma, but the condition needs to be better understood since not all dogs with the abnormalities acquire the disease. A previous WCVM study has also demonstrated that the presence of certain pre-iridal membranes is associated with glaucoma development.

The globes of 30 dogs — 10 with primary glaucoma, 10 with secondary glaucoma and 10 with no sign of the disease — will be evaluated. Test results will advance diagnosis and treatment by expanding researchers’ understanding of canine glaucoma and its underlying cause.

Chronic renal failure, a common disease in elderly cats, significantly reduces their quality of life and leads to complications such as anemia and cachexia—general ill health and weakness. Omega 3 fatty acid supplementation has been shown to benefit dogs suffering from heart disease and cancer and has provided a variety of positive effects for humans with chronic renal failure.

Although Omega 3 supplementation appears to be effective, no one has studied its potential benefits in cats or dogs with spontaneous chronic renal disease. Having a therapy that can reduce cachexia and slow the progression of anemia should improve the quality of life and increase the survival time of affected cats.

In this study, researcher will randomize 15 cats with chronic renal failure into a placebo-controlled crossover study. Baseline information will be obtained including a thorough history, quality of life assessment, physical exam and variety of laboratory tests. After two months of eating the placebo or supplement diet, each cat will switch to the opposite diet for two months. Results of final testing will show if Omega 3 supplementation can benefit cats with chronic renal failure.

Pain relief is an important component of veterinary medicine, and improving knowledge regarding analgesia for perioperative pain in cats is clinically important. Although ketamine has been widely used in veterinary anesthesia, high dosages in cats have led to a prolonged recovery and high dose ketamine infusions aren’t recommended in a clinical setting.

However, ketamine has many desirable characteristics when used in low doses as an analgesic. In this study, researchers will test this further by administering low dose infusions of ketamine to cats in three different dosages. Scientists will assess each animal’s pain threshold by applying a mild, transient heat or mechanical stimulus until a reflex response occurs — a technique used in previous studies.

Besides recording skin temperature to measure thermal threshold and cuff pressure to measure mechanical threshold, researchers will monitor the cats for behavioural side effects. The information about appropriate use of ketamine is important for determining effective pain control treatments in cats and the effects of each dosage.

Cancer is devastating to both humans and animals, and although tremendous progress has been made in treating primary tumours, cancer cells still spread to other sites in the body causing secondary tumours.

An insufficient oxygen supply (hypoxia) has been found in most tumours and is strongly linked with tumour development, growth, metastasis and poor response to therapy. The unfolded protein response (UPR) is one of three signalling pathways that regulate the cell’s response to hypoxia. Developing unique drugs and gene therapy for suppressing the UPR could effectively control the growth and spread of cancer in both animals and humans.

In this study researchers will use the canine genome database to develop and test genetic probes for monitoring components of the UPR in dogs. They will then use these probes to examine components of the UPR in various canine tumours and adjacent normal tissue. Investigators will also monitor both normal and tumour cells infected with vectors that express Zhangfei—a recently identified protein that may effectively turn off the genetic response that activates UPR.

This site uses Akismet to reduce spam. Learn how your comment data is processed.

You share more things in common with...
full story »